Media about us: Chemsys new warehouse in Kaunas FEZ 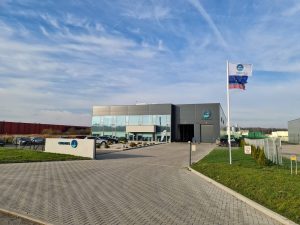 Tomas Jankauskas, head of UAB Chemsys, says that right after the announcement of plans for their establishment in the Kaunas Free Economic Zone (FEZ), he received a number of calls from the curious heads of similar-sized companies: “Well, how’s it going? Is it worth it, what are the conditions, what are the benefits, and what are the paybacks?”

“My answer at the moment is: Yes, it is worth it, and for us this relocation and the total investment in the plot and buildings, which amounted to about €1,4 million, will surely pay off,” says the head of Kaunas company selling water treatment equipment components.

Having announced their coming to the Kaunas FEZ at the end of 2018, already a year later, Chemsys had a functioning warehouse of 2,000 m2 on a 0.4 ha plot, and this spring, immediately after the quarantine, moved to the new 200 m2 office. Although the global pandemic slightly adjusted the plans for the nearest future and encouraged a more cautious approach to the development strategy, the growth trend nevertheless remained stable and Mr Jankauskas admits that if he were planning such an investment today, he would choose a plot at least two or maybe even three times larger:

“We calculate that with the company’s current infrastructure we can grow our turnover by nearly double: if last year the turnover amounted to almost €5 million, then this year we are planning to exceed the threshold of €6 million. With our existing warehouse we could grow to at least €10 million more, and then we will have to think about further development.”

Leaders in a narrow profile

According to the head of UAB Chemsys, the success of the business is determined by their position as the leader in a very narrow business profile: the company imports components of water treatment equipment from around the world and sells them to those involved in water treatment projects, ranging from domestic to industrial and public projects.

“We import containers full of the materials necessary to assemble water treatment equipment – from household filters in private homes to cleaning equipment used in industrial giants such as Achema or Lifosa. Our main know-how is what materials we need to store in our warehouses and to be able to offer companies involved in water treatment projects the most appropriate means to implement solutions.

Few companies develop analogous business – we could find maybe 5–6 companies in Europe, among which we are one of the smallest but fastest growing ones.We have calculated that we have regular partners in 16 countries, which constantly purchase products from us each month. Meanwhile, the majority of our imports consist of goods from China and the USA, as well as some from Brazil and India,” says Mr Jankauskas, who has been working in this field for 28 years.

After entering the FEZ, Chemsys has also undertaken several new activities focused on industrial enterprises, which are subject to water corrections for production processes. There was also a start of some minor production: combinations of necessary materials are mixed, packed and sold under the brand name Chemsys. For the development of this new but fast-growing product, the company hired a new employee and started exporting: a number of such materials go to Poland, as well as to Russia and Belarus with the necessary certificates.

“In principle, a business like ours could be carried out anywhere, most importantly there should be good and convenient logistic connections. And in this area the Kaunas FEZ really has something to boast about: after the opening of the new viaduct, we, our customers, and the transport companies that serve us are all very pleased,” says Mr Jankauskas, whose company imports over 150 maritime container goods each year, and more than 100 fully loaded trucks come from Europe.

As many as arrive, almost the same number leaves: only about 14–15% of Chemsys-imported products remain in Lithuania, everything else is exported. Around 30% of exports go East, with the remaining 70% – for Europe and the Middle East. In recent years, the company has increasingly entered into more stable markets in Western Europe and already has steady importers to France and England.

In addition to such advantages of the Kaunas FEZ as real estate tax and corporate tax reliefs, Mr Jankauskas also notes the favourable attitude of employees:

“I have already discovered that the Kaunas FEZ has its own pull, which is created both by a new high-quality environment and by the prestigious companies located here. Over this year, we have recruited four new employees – even during their interviews they named the location of the company among the motivating reasons to come work with us. This move has given our company solidity and credibility, making it easier to attract and hire people. What makes a suitable person? In our case – several dozen per cent growth in annual turnover,” notes the head of Chemsys.

Currently, this company has 14 employees and speaks with caution about further increasing the number of staff: although there were plans to hire more people this year, this was slowed down by the challenges posed by the pandemic – increased customer debts, especially in those markets that were not supported or insufficiently supported by the government – Israel, Dubai, Russia, and Ukraine.

“Although, theoretically, we could calculate profits of about half a million euro for this year, this earned profit is drowned out by protracted credits – and how about the depreciation of the Russian rouble or the problems in Belarus? Although the situation in Western Europe is much better, industrial companies have introduced precautionary regimes and are holding back investment projects, waiting for more predictable times. So we too remain vigilant,” says the head of Chemsys.

Therefore, the workspaces that have been prepared and already fully equipped in the new office will remain empty for some time, but Mr Jankauskas has no doubt that the wait will not be long, especially since additional forces are necessary for the expected growth.

The company employs chemical and engineering specialists with knowledge of at least two foreign languages – English and Russian, in which the main communication with foreign clients takes place. Of course, the truth is that it is practically impossible to find future employees like this at random, and it takes the company at least a year to grow such employees to their full potential.

Kaunas FEZ’s first investor was established in 2005. Currently, 34 foreign and Lithuanian capital companies operate in the industrial zone, which created more than 5,300 jobs and generated 0.31% of the total Lithuanian domestic product. The Kaunas FEZ has attracted €680 million in direct investment since the establishment of the first investor.